At the start of the project partners shared their existing experience and expertise, and produced a list of critical success and failure points to inspire and direct the development of science communication projects.

They include points in relation to the design, production and the way the public participates in the activity.

Member of European Parliament (MEP) Malcolm Harbour delivered his speech at the conference after dinner, addressing the role of politics in developing science. He discussed the projects which have fascinated him and how his position in Europe allows him more freedom to focus on looking at the work he’s interested in.

He began by saying that he trained as an engineer so thinks of himself as an applied scientist but stressed that in politics there are very few people with a scientific background.

Marcos Perez from Casa de las Ciencias spoke to us at the EU Cities and Science Communication conference about enhancing science communication and ways of overcoming barriers between scientists and the public.

It’s a really interesting clip as Marcos has some very thoughtful views and, interestingly, feels that science literacy is an area which needs addressing with more urgency than the process of celebrating scientists’ work, if we are to communicate more effectively with public audiences. You can watch the video above and find out more about recommendations for celebrating science and scientists here. 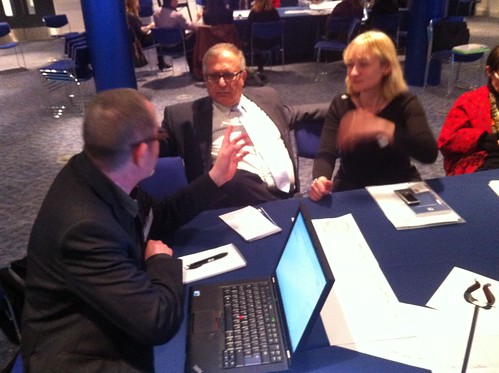 The group discussed policy ideas that might champion evidence-based research. Whether or not to widen the question to include concepts of trust was tackled early on: “is the problem credibility?”. I was felt that the issue of “experts” was crucial:

“In religion and politics we have experts, in science we have evidence-based process. You have to defend the process of doubt.”

The team split into two and brainstormed policy ideas and discussed how they could be focussed, and the timeframe that they would take to implement. Some of the discussed ideas were:

All of the ideas were uploaded them to this online spreadsheet:

The discussion this afternoon was focused on strengthening science literacy and developing practical ideas to formulate science policy. But before the discussions could continue, the group had to discuss the meaning of the topic.

The group quickly honed in on the word ‘literacy’ as the key part of the topic sentence. An alternative suggestion was ‘citizenship’, which implies that people don’t have to know the science, but have to understand the issues and be able to make choices. Engagement was raised as another possible term, and it was noted that it also links into the concept of citizenship.

These discussions were not resolved, so the group moved on to talk about the practical things that could be done under the topic ‘strengthen science literacy’.

Policy recommendations and the specifics of the discussion will follow once the group reconvenes to present their ideas. You can see the spreadsheet containing their recommendations here.

One group tackled the subject of celebrating and promoting science, and they began by thinking about the different tools which can be used to do this as well as the ways in which science is communicated. They also used this time to discuss some of the issues and barriers which might impact on this area.

Here are some of the thoughts which they came up with and discussed in the process of designing their policy recommendations, and how those ideas evolved:

Here at the planetarium we have a pleasant task…how to make astronomy, science and fulldome (360-degree) video technology sexy? Our Facebook page attempts to achieve this, and promotes the work the planetarium team does daily. Presenting astronomy shows every day teaches us one thing…you need to keep the content up to date, local and relevant to peoples lives.

Visit our planetarium page, and you will find the latest and coolest astronomy/cosmology news in the form of breathtaking images, videos and shows; as well as the latest developments in the fulldome medium (eg. the Fulldome Film Festival happening at Thinktank in March). Astronomy as a science is beautiful, and here at the planetarium we marry astronomy with music, theatre, art and even poetry.

The next generation of astronomers and astronauts are being taught by us everyday, and we have a responsibility to ensure they appreciate the science of astronomy without necessarily having to understand it.

We arouse the natural curiosity that lives inside all children, and show them that the Universe is inside us, we are indeed, in a very deep sense part of the Cosmos.

To find out more, just visit us online at www.facebook.com/thinktankplanet and let us take you on a 360-degree journey through the Cosmos in style!

Posted on January 27, 2011 by Ian Ravenscroft
The New Optimists is a book asking scientists the question: “What makes you optimistic?”

Sue Beardsmore chaired a panel talking with Kate Cooper, the publisher of the book, and two professional scientists, Dr Juliet Coates (a young botanist from UoB) and Aston’s Professor PeterLambert (a microbiologist with a substantial research career behind him).

Juliette, whose research is focused on the development and evolution of complex plants, said she was optimistic about: “Plant evolution, the key to a new generation”. Peter Lambert, who was interested in infections caused by bacteria and how they’re treated with antibiotics, cited “Microbiology, the key to life on earth” as his subject for optimism.

The New Optimists concept was focused on scientists in the West Midlands initially, and was boosted by Julia King, vice-chancellor of Aston University, who was one of the first people to asked to contribute. She not only agreed, but recommended other people for the project.

During the panel discussion, Kate Cooper said that scientists often get criticised for not communicating, but  suggested that scientists are good communicators, they just need a platform. She said: “The New Optimists gave them an easy platform to talk about what they were interested in, not today, but tomorrow.”

Juliette said she was optimistic about plants as they are organisms that can be very useful to society, for example algae as a future biofuel or food source.

Peter Lambert said he had always been optimistic about science and that microbiology was important, as it keeps us alive. Microorganisms were the first things on Earth, “The key to life”, he said,  and  we should “take them for granted at our peril”.

Juliette saw the New Optimists project as an opportunity to target a new group of people. The question was not difficult to answer in the end, she explained, but it had made her think about how what she was doing could benefit a wider group of people.

Although contributing to the project was not a direct benefit to their jobs, bot scientists agreed that writing to a wider audience was useful and was different to writing for journals and funding applications.

On a related note, Peter suggested that if you couldn’t explain the science in ‘lay’ terms, perhaps you shouldn’t do the work. The point was to understand the basic concepts, he insisted, and communicate them to people.

One question from the audience asked, what can scientists do to go beyond The New Optimists to get young people, for example, to engage with science. Juliette said she does voluntary work in schools and this was an important part of her job for her.

With €330 million to spend, the scientists suggested it should go on high-class science communication and to encourage positive dialogue with the media about science. Targeting children was important, they added, to get them enthused and fired up about science.

Scientists, Peter argued, should be forced to communicate, rather than selfishly working on own projects. Although a member of the audience suggested that most scientists are interested in science, not public speaking, but agreed a proportion of budgets should go on public engagement.

Kate said that some lessons from The New Optimists included:

The New Optimists at CASC

Kate Cooper talks briefly to Dr Juliet Coates and Aston’s Professor Peter Lambert about what makes them optimistic and the New Optimists.

You can listen to some fab feedback given to the conference from what happened here:

Or read a little more below… 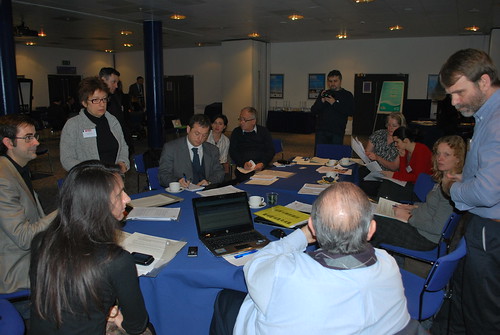 The group from Work Package Three focused on targeting hard-to-reach groups, and tackled the questions:

1. A science day in a rural city in Hungary

There is no science museum in the region, no scientists, and a lot of people without access to the internet. END_OF_DOCUMENT_TOKEN_TO_BE_REPLACED