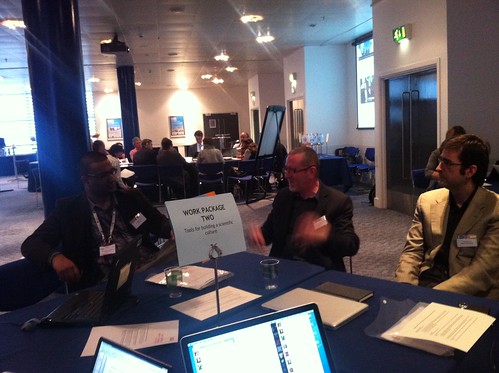 Science in the News was a week long programme for children with teachers looking at newspaper representations of science—groups 10-14, 14-16, over 16). It found that each school system is different in its attitude to things coming from outside. In some systems you can talk to the teacher, in some you have to go to government level.

That didn’t work too well, so the second (Science in my Life) was open across the internet, a video contest. Around 70 entries and 5 finalists.

The study visits were helpful for understanding context and testing what “you’ve seen against what you’ve been told”.

Schools engagement is difficult, we should try to do things outside school. – Marcos Perez (ARMuseos Cientificos Coruneses)

Getting the show right for the audience is important. The most popular globally might not be right for your audience. – Zeeshaan Dinally (ThinkTank)

Need to understand the difference between inspiration and learning.  This is important because in systems where children can drop science at an early age they make that decision on emotion.

But you can’t do B without doing A — science is linear, a commitment. “You need to understand Galileo to understand Newton… and then you can go to Einstein.”

To engage older children we need to open spaces to their experimentation and testing. They are in “testing mode” — they want to do rather than receive input.

We assume younger children have short attention spans, but teacher experience in rather opposite. Teenagers without engagement have rather shorter attention spans, pay-off or spectacular is needed.

In Shanghai (from a study visit) they plan a lot of things—both the school system and the after school system is very successful. Europe has an open market and it’s left up to the parents to decide. We should plan programmes for Cities, they can collate the information, the facilities are there.

Policy to encourage visits and sharing of best practice is important, to share implementation is worth the extra work.

Public opinion is based on media and the scientists aren’t often listened to — can we make discussions more rounded and informed by finding platforms for discussion that don’t involved knowing a great deal of science knowledge.

How do you get direct access to scientists? To the layperson, what’s the difference between a scientist and a “quack” if they both present credentials. Presenting scientists as authorities without discussion of the validation process creates that problem.